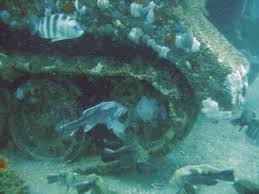 Due to the natural sandy bottom off the coast of South Carolina the Department of Natural Resources and the Army Corps of Engineers have created 45 man made fishing reefs. These reefs were designed to provide a man made habitat of various structures for marine species to congregate. There are 12 artificial reefs near the coast of Hilton Head Island, SC. The reef sites are constructed from a variety of durable materials including specially designed concrete and steel structures, ships and tugboats, barges, even army tanks and subway cars. When durable materials such as these are placed in the marine environment their surfaces are rapidly colonized, and eventually completely covered, by a wide variety of sessile organisms including algae, barnacles, corals, sponges, hydroids, bryozoans, and marine worms. In time, these organisms become the foundation of the reef community and the base of the food web which is critical to later fishing success. One of the most popular reefs in Hilton Head Island is the Betsy Ross Reef.
The Betsy Ross Reef is about 20 miles east of the Port Royal Sound. Many species of fish live here, including Red snapper, black sea bass, grouper, barracuda, king mackerel, spanish mackerel and sharks.

A 440-foot liberty ship named Betsy Ross is the highlight of the reef. It is the largest single piece of artificial-reef structure off the South Carolina coast. Over the years, there have been additions of subway cars, a 175-foot ship, and sections of the old Paris Island bridge.

Betsy Ross Reef consists of the following  pieces of material: